This morning was my first Friday back after many weeks of non-routine events. Our family was in California for my wonderful father-in-law’s funeral and last week I was in prison all weekend doing ministry. So after two weeks of schedule disruption, it was nice to settle back into our family routine. And that included my normal Friday routine downtown.

Wayside was uneventful and I spent the time serving breakfast, greeting folks and catching up with Dr John (the other Friday morning volunteer there who is a fixture he has been there so long). And in front of the abortion clinic it was similar. I spoke with Donna, Dave and Ed and met Jonathan, Hannah, Brian and Keith — some younger folks who were there to join us. It is so nice to see younger people of faith get involved in issues and events outside of themselves. These youth are the next generation of mission workers, youth ministers and kingdom harvesters.

There is one clinic escort who is particularly interesting. She is older and “hardened”. She never bats an eye if I say good morning to her and she loathes anyone not in an orange vest or entering the clinic. From her behavior and her eyes, I see a lot of pain and bitterness. Consequently, I pray for her. I mostly pray for her heart to be softened. Note that I did not pray for her to be converted or for her to see the other side — just that her heart be softened. God can do a lot with that.

So this morning I prayed for that and had moved along in my prayers when I heard a commotion and opened my eyes. I did not see what happened but saw this older lady escort out on the sidewalk on her back. It appeared she had fallen. Several of those praying immediately rushed to her side and offered comfort and assistance. They held her head and put arms around her for support. After a minute or two they helped her to her feet. At one point she was an orange vest surrounded by 3 or 4 plain clothes people. The other orange vests didn’t really like that “the enemy” was loving on their co-worker so they engaged, sloughed off the offer of help and retreated her to the other side of the property line beyond the reach of any of us. One of the young men had run next door to A Woman’s Choice and retrieved a first aid kit. He offered it up and held it out which was flatly refused by one of the orange vests managing the old lady victim. I found it interesting that, in spite of the obvious need, they were willing to forgo aid because of the hand that was holding it. The young man then laid it on the clinic side of the property line where they then took it and opened it looking for helpful materials. I found the first aid kit scene reminiscent of a hiker wanting to feed a wild deer or squirrel holding out food, but the animal not taking it. Only when the food is laid down does the animal eat. While I understand the lack of trust the deer/squirrel/orange vest has for the one offering up something good for it, I have a higher expectation of those who have cognitive reasoning to put aside mistrust for their greater need. All I could think of is that there must be a lot of hate, bitterness, anger, and loathing to not take something that is offered up to fulfill a true need.

What I saw in that fall was unconditional love on a human being in need. The issues temporarily evaporated (but not for long) and folks of different and opposite viewpoints were just trying to love and help their neighbor — that is all. And isn’t that what we are called to do? Love our neighbor. Love our enemies.

I can only hope that through the pain of the fall and what she was going through that she felt the love of those she loathes. I pray a seed was planted and some day her heart will be softened.

It did get me wondering — what would happen if one of our old ladies fell and hurt themselves in front of them?

This morning on my commute to work I experienced a different facet of my roadside ministry. While I have not blogged about most of my roadside discipling encounters (in an effort to be true to Matthew 6), almost all of the reactions to the physical assistance and spiritual reference have ranged from belated happiness/thankfulness to ambivalence. To date I have not had someone outright deny or reject the assistance or message I am conveying. That all changed this morning.

I happened to be listening to a Chip Ingram podcast (highly recommended by the way) and noticed a Ford truck on the other side of the road. I grabbed a Jesus card and stuck it in my pocket but then noticed that the two guys changing the flat tire were pretty much already done. I didn’t think they needed my help so I passed by them and cruised through the next intersection without turning around. However, something prompted me to turn around at the next intersection and go back.

—– tangent —–
Now I don’t know why I always say “something”. I know it is the Holy Spirit prompting me to action. And as my walk with Jesus continues on, my heart continues to clarify tuning into the Holy Spirit and the message He is giving me. Kind of like an old school dial radio where you heard a faint radio station in the distance and you dialed in the tuner to clarify the signal and remove the static.
—– tangent off —–

Even though I was pretty sure they were almost done with changing the flat tire and didn’t need my help, I was prompted to turn around to deliver the message that Jesus loves them and someone else out in the world cares about them and their safety (physically and spiritually). This was one time where it was clear to me this wasn’t about physically helping someone out of a jam on the side of the road. Even though they were good they needed to hear the message of love and Jesus.

I pulled up behind the truck, got out and asked them if they needed any help. The rough guy working on the right front wheel lugs looked up thankfully but continued on the tire stating that they were good. I asked them if they needed anything else and he commented they were good and nodded and smiled. I then pulled out the Jesus card, gave it to him and asked if he knew about the love of Jesus. The smile melted from his face and it appeared to change to disgust. He backed up a step like I was a leper and stated that he was an atheist. He thrust the card back to me. It caught me off guard and I was completely unprepared for the situation. All I could do was tell him that I just wanted to make sure they were ok and that he could discard the card. I told them to have a good day and returned to my vehicle.

While I felt like an impotent failure, a sadness settled over me – not necessarily because I failed or because I didn’t make an impact, but because here was a man who clearly did not want to have anything to do with the great God who made him and loves him. I don’t know why that impacted me so much because I come across people every day who are ambivalent to the God who wants to have an intimate, personal relationship with them. But the visual message of deliberately walking apart from God was strong and I felt sadness for what he was missing out on – and sadness for God that one of his children was choosing to not walk with Him. Again, I understand this happens every single day but for some reason it was intensely manifested in this scenario.

I’d like to think that I could become a better convincer or effective persuader so that these folks can experience the love and joy Christ brings. However, that would put too much emphasis on what I do and not enough emphasis on what Jesus can do. I guess it is in times like these where I feel absolutely impotent, incapable and ill-equipped that God does His best work.

If I could write the ending to this story it would be this – that the man stuck that card back into his pocket because he did not want to litter. And then later in the day, after a hard time at work or maybe an argument with his girlfriend, he will fumble for his keys and feel that card and pull it out to throw it away. And the words Jesus Loves You will tug at his hurting heart. And he will read further the words of Christ and about His unending love for HIM. And that will begin the softening process of his heart and he will seek out his long lost grandma who never stopped praying for him — that her prodigal grandson would finally accept the Jesus she taught him about when he was little. And it is all because Jesus fills in any of our gaps, falls, and shortcomings when it comes to spreading His Gospel.

This morning on the drive to work the moonset was inspiring enough for me to pull over an try to capture the splendor of the large moon low in the western sky. I did not do it justice but captured it nonetheless. 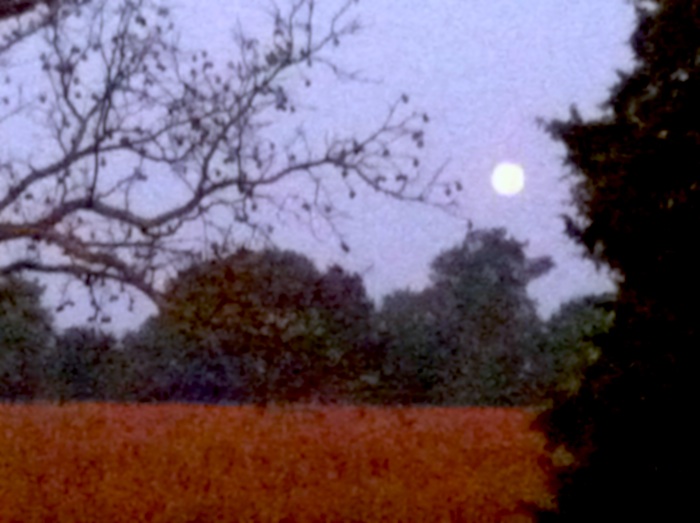 And then, thinking that was all, I glanced to my right and caught the colorful glow of the morning sunrise. The bright orange ball had not cleared the horizon yet, however, it was already having an impact. 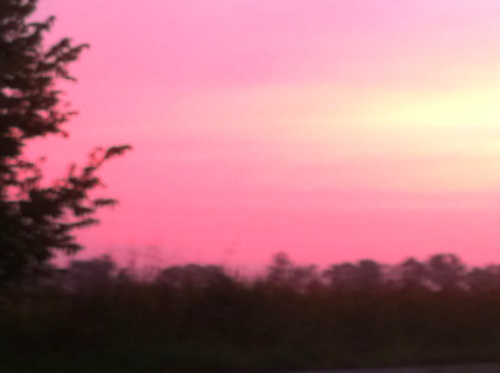 The video below underscores how love and kindness can truly impact lives.

Lives can be changed by those who care and love. Get out there and love your neighbor.