I came across this quote today and it has a lot of relevance and logic. Therefore I am sharing it.

“With hurricanes, tornadoes, floods, tsunamis, brush fires, mud slides, and severe thunderstorms tearing up the country from one end to another, and with the threat of swine flu and terrorist attacks, are we sure this is a good time to take God out of the Pledge of Allegiance?”

So as I wrote in my previous post, I had some business to do in New Jersey today. Luckily, everything went smoothly and I was able to get out of there and into NYC around 4:30pm. Having never been there, I quickly realized with the New Jersey and NYC traffic that I had to channel my previous LA driving persona just to survive. Plus, it was a rental.

No sooner had I popped out of the Holland Tunnel and made my way down to Battery Park to see my girlfriend, Lady Liberty, then I ended up turned around trying to find parking and wound up on the Brooklyn Bridge going away from the city. Luckily, I was able to maneuver back 180 degrees and return. My whole ordeal of hitting Manhattan and then going away and then coming back and finding parking wasted about an hour. When I was finally able to park and walk to Battery Park, there were no more tickets or ferries going out to the statue so I had to relegate myself to gaze at her from afar. Her is my iPhone picture attempt at capturing her beauty and what she means to me and this special country of ours. 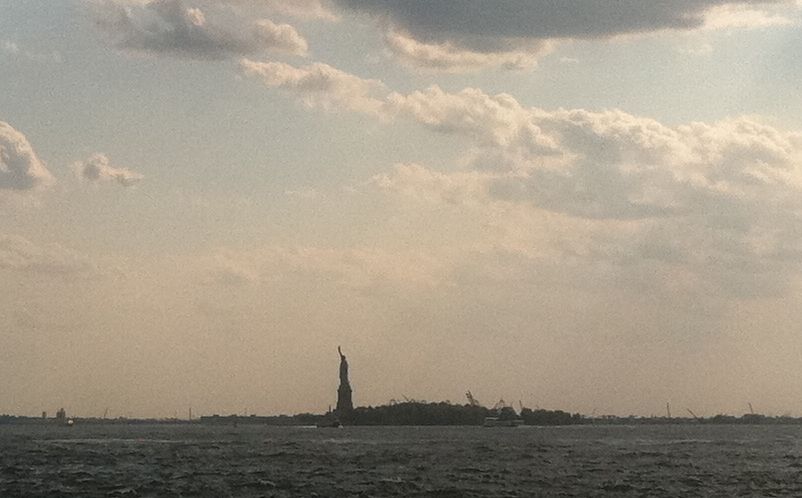 Soon enough I wandered over to Wall Street to see the NYSE. On the way there, I stumbled across that big bull statue and snapped a picture. Interestingly, the NYSE had a Norwegian flag flying in solidarity with those in Norway affected by extremist violence. Being full Norwegian, this was special and a sight I will probably never see again. 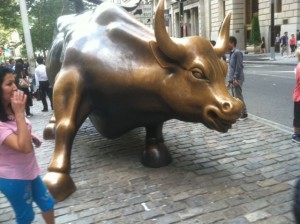 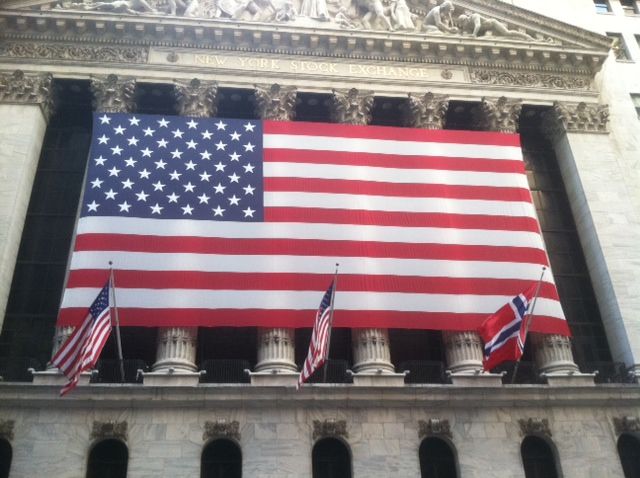 I also enjoyed the WWII memorial in Battery Park with all the names in stone and a very cool eagle statue. I also stumbled upon the Irish Potato Famine Memorial on the west side by the water. And finally spent some time praying around Ground Zero and all the building they are doing there. I look forward to coming back once the 9-11 memorial and museum are finished. 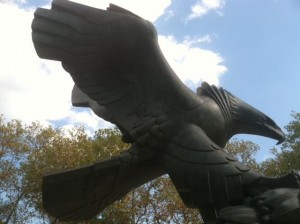 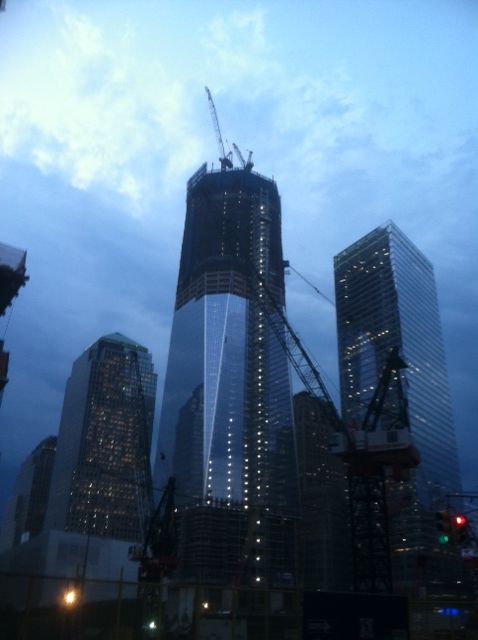 And finally after all that I had built up a hunger and needed some good New York deli grub so I went to a friend’s recommendation at Katz’s Deli. Now I had not heard of it but he clued me in that it was the deli they used in THE scene in “When Harry Met Sally”. The pastrami sandwich was out of this world! Thanks for the suggestions Mr. James!

Well, that was my whirlwind afternoon tour of NYC. I know I missed so much and hope to come back some day to pick up where I left off.

I have been slacking lately blogging. And I have some good posts in my head but have been sidetracked for one reason or another. And I have a quick trip tomorrow and am gonna try to hit NYC in the evening. I have never been and hope to see my 2nd favorite lady (the Statue of Liberty….. get your mind out of the gutter) as well as Ground Zero. It all depends if I can get what I need to get done in NJ and make it over to NYC.

But in the meantime, across the country in the other corner this weekend, my sister sang one of my favorite songs, our National Anthem, at a local fly in. She rocked it and the timing is perfect at the end — the roar of the F-18 flying over drowned out her last note just like it should be. The people at NASCAR should take note. And Christina Aguilara….. the one who slaughtered our Anthem at the Superbowl….. take note as well. 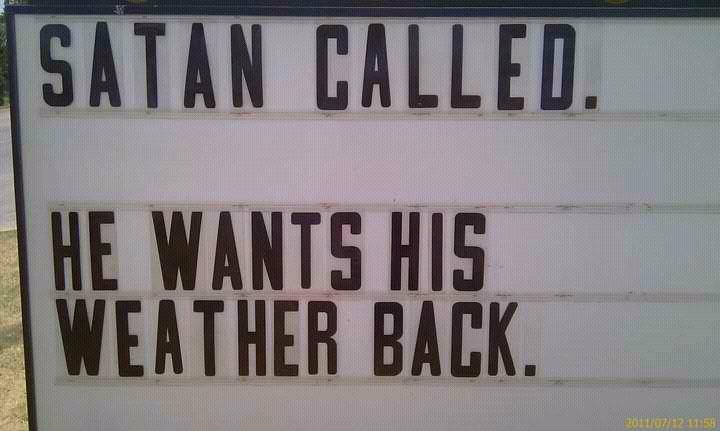 I think the sign above only begins to tell the story.

I don’t spend much time blogging at work — mostly because I am way too busy. But right now I was hit with a thought so much that I had to make it my Facebook status as well as a blog post.

Thank God the scorching hot weather finally broke. A storm came through on Tuesday evening that was pretty spectacular to watch. The wind gusted up to 50-60mph and the wispy clouds would no sooner appear and then disappear on the opposite horizon. At 4:30pm the parking lot lights at work came on because it was so dark. And torrents of rain came down and took the day from 98F degrees to 74F degrees in a couple of hours. So now we just have “normal” summer weather instead of unbearable equatorial humid heat.

Today was actually very nice. This evening I sat out on the back patio with all my ladies — the wife and daughters until I finally figured out we were wasting some of the evening away. So my wife and I took our normal 2 mile walk down our back country road. It was nice because it wasn’t too hot or too cold — a perfect evening for a walk with my wife. And my son tagged along.

When we returned home, we could see the girls sitting on the hammock in the front yard talking, which, as a parent, is so nice to see. With R going away to college in September, it is good that they are enjoying each other now before things change.

They almost dumped each other over on the hammock trying to get out while yelling “We DOOOO!!!!”.

So soon enough we were all in my wife’s truck with the windows down cruising along our back country road to get some ice cream. The air was comfortable, the kids behaved, the sun was setting, the full moon was peeking over the trees, and all was right in the world.

I had a double scoop of chocolate coconut almond fudge on a waffle cone. Yum!

It reminds me of a saying I used to hear from folks that lived out in the California desert — “But it’s a dry heat”.

My reply living here — “Uhhhh, no it’s not! It’s pretty much a suck-the-air-out-of-your-lungs heat.”

I hope you are cooler where you live. I thank God I have affordable, operational air conditioning.

Every Saturday I meet several other Christian men for an Emmaus Accountability group. We review our week, share our highs and lows, encourage each other, and hold each other accountable on our walk with Jesus.

So this on this beautiful Saturday morning on my drive to Accountability, I was exposed to several “ordinary to me” scenes that I thought I would share.

Scenes from a morning drive

Interestingly, I tried the speech conversion tool app on my iPhone so I could hands-free talk this list and send it via email. Below is the interesting result.

Games from 3 Morning Dr.
Haizhou and about running alongside my car in a few still meadow.
Miss rising from a farm pond.
Bob I’m running up of four for 10.
Can you give yard sale time.
Deep green corn reaching for the baby blue morning sky.

Note to self — don’t ever use voice recognition app without proofing output.

THIS IS HOW YOU FIX CONGRESS!!!!! And God knows Congress and other areas of government sure need fixin’!

While Slappy McSploder and I were arranging, sequencing and fusing fireworks in the garage this weekend in preparation for Thunder Over Finchville, we had the mancave TV on to Speed Channel and ESPN. One spot that caught my attention was a feature that ESPN did on ultimate fighter Rad Martinez. Now, I am not an ultimate fighting fan, but in watching this piece, I developed a deep respect for this young man and his commitment to something other than himself. I highly encourage you to watch the video clip below.