This post is a follow up to my impromptu lunch with Jesse from a week and a half ago. If you haven’t done so already, read it first. 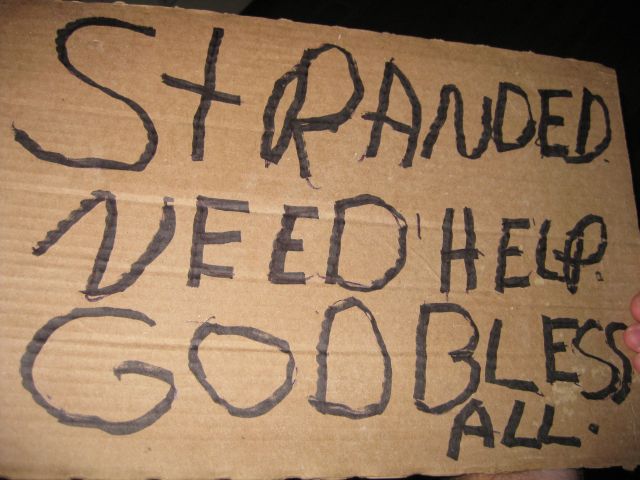 As Jesse got into the back seat and we headed towards our nearby lunch destination, I became aware of the unpleasant smell of alcohol. Knowing that my friend and I had just come from work and neither one of us had been drinking, my acute deduction powers kicked in pointing to Jesse. In a respectable way as lovingly as I could, I asked him if he had been drinking already today (seeing as it was only 11:30am). Jesse confessed to having a beer and I made it clear to him that I had provided him funds for a bus ticket to get home and that I wanted to see him use that money for just such an effort. Expectedly, he stated that he, indeed, would be purchasing a bus ticket after having lunch with us. It was a disappointing, but very human, piece of information.

The three of us grabbed a table and began the process of making the situation as normal as can be. I gave Jesse a summary of the day’s events on how my friend and I ended up at lunch and what our relationship was. My friend and I have many similarities in our lives and it was kind of neat to summarize a few of those in front of a stranger. It was my goal to get Jesse to feel comfortable and be a part of the conversation and lunch events, not just be a third wheel or spectator. I have found that in situations like these it is very important to, not only tend to someone’s physical needs, but to make them feel wanted, loved and important. It is these human aspects that society often misses when trying to take care of these situations. And they are almost always left out in government “solutions” and programs because it is subjective and not quantifiable. But that doesn’t mean it is not important. Quite often, it is more important than the problem itself whether it be homelessness, unemployment, addiction or abuse.

My friend and I asked Jesse some basic informational questions and answered similarly — where we live, where we’re from, people in our lives, etc. We found out Jesse lives down in Franklin county outside of Bowling Green. He does carpentry construction and has not had a good go of it since he fell off a roof a while back. Unfortunately, he is also recently divorced and out of work. He was up in Crestwood visiting his 17 year old daughter and was trying to make his way back home. He has lived in Kentucky all his life and seems like a pretty nice guy when he isn’t drinking the 6-10 beers a day he said he had a problem with. I found it interesting that he clarified that he doesn’t get “drop dead drunk” but rather just drinks throughout the day. He admitted he had a problem with alcohol and said he had been to a few AA meetings but didn’t “get it”. He wondered how a bunch of people sitting around saying their name and admitting they were alcoholics actually helped anyone. I told him that I knew many people have been helped by AA and that he might need to give it another shot.

The conversation progressed as we ordered and received our food. I found it interesting that Jesse didn’t order extravagantly or even get a drink. He ordered off the lunch specials menu and asked for water. As we dug into our grub, the discussion turned spiritual. My friend and I had an opportunity to witness to Jesse and share the hope we have in Christ. (“But in your hearts set apart Christ as Lord. Always be prepared to give an answer to everyone who asks you to give the reason for the hope that you have. But do this with gentleness and respect.” — 1 Peter 3:15) Jesse said he believed in Christ and occasionally attends church at home. I encouraged him to fully pursue his relationship with Christ and to seek help in defeating his alcohol demon. I told him we all have our demons and that none of us can do it alone. It is only in the freedom and redemption in Christ’s death were we can truly live free from sin’s declining spiral.

After finishing his meal, Jesse kindly thanked both of us and said goodbye. He left out a side door and headed down the street towards the local bus line that would take him downtown to the Greyhound station. We watched him walk out of sight as we finished up our meals and drinks. I was hopefully optimistic that he would use the funds to get back home. And hopefully, just hopefully, it will be a small step towards normalcy and possibly recovery some day. He has been in my prayers often since that day and will continue to be.

And a lesson I learned a while ago continues to ring true. Again, I have learned that I don’t need to have all the answers to be a part of the solution.

Comment1 | Share | Tweet | print | email
Categories: Serving Christ, The People You Meet
Disclosure of Material Connection: Some of the links in the post above are “affiliate links.” This means if you click on the link and purchase the item, I will receive an affiliate commission. Regardless, I only recommend products or services I use personally and believe will add value to my readers. I am disclosing this in accordance with the Federal Trade Commission’s 16 CFR, Part 255: “Guides Concerning the Use of Endorsements and Testimonials in Advertising.”

One thought on “Serving Christ…..part 2”