On our way home from a celebratory dinner last night, we saw two calves running through a field. My two daughter’s responses were:

However, my son’s response cracked me up. He said:

I found out Friday that our sweet corn crop out back was finally ready. D and I went back there to pick the first of our bounty this weekend. We weren’t the first ones because there were signs, both on the ground and on the stalks, that the deer are enjoying it too. We picked enough for us and then lots more for friends and neighbors. I think we’ll be picking throughout this week. 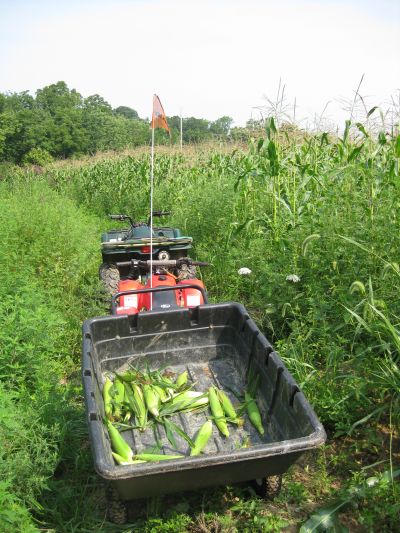 We also enjoyed a surprise crop from an unexpected place. You see, this year, while our garden is doing well, the cucumbers in the garden did not. I think when I rototilled and weeded next to the starter vines they became disturbed and never recovered. So we have not enjoyed multiple cucumbers a day this summer much to the distress of D who loves them.

Well, lo and behold a thrown away cucumber dropped its seeds in the compost bin and took root. And with it being left alone along with all that nutrient rich soil it grew and grew and surprised us with foot long plus cucumbers. We pulled four off yesterday and another off today. There are several more that will be ready some time this week. What a surprise and thrill that was for us. 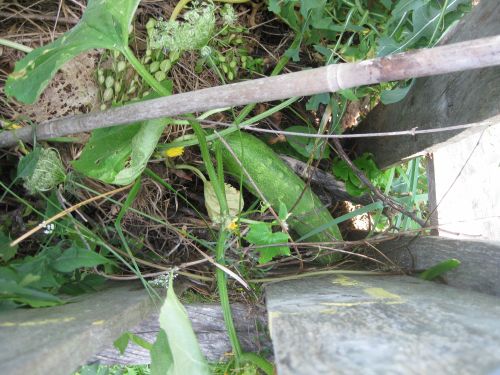 Over the next several days, it is my hope to reflect on and process the material and notes I have. This first output is a response to one of the last sessions on Friday with Bono of U2.

If you didn’t know, Bono has become more and more famous for his Africa hunger/famine/AIDS outreach than for his being the lead singer for U2. While I haven’t always agreed with his methods or politics, I do admire his passion and drive. And you do have to give it to him — you don’t see many other rock stars hanging it out there beyond their narcisistic selves.

I was very impacted by the interview with Bono…..specifically, what we need to do about the world health and poverty crisis. And I have been moved by an idea. An idea way beyond me but an idea I feel needs to be acted upon none the less. This idea revolves around the medicines that have significant impact to the lives of impoverished people. Let me set the stage for you.

I currently work for one of the world’s largest biopharmaceutical companies. While we have a wonderful mission — serving patients — the company has slowly eroded into a corporation whose primary pursuit is the dollar and quarterly approval by Wall Street (quite a different place where the company was 12 years ago when I joined).

==== tangeant ====
Now don’t get me wrong – I understand all about capitalism and the pursuit of a dollar. What I do not support is the pursuit of a dollar at the expense of someone else. And I am seeing that more and more in today’s world — both on the business side and the politics side. I feel that sometimes the politicians are more self-absorbed power and dollar chasers than our capitalistic CEOs although quite often it is an even tie.
==== tangeant off ====

In the sole pursuit of the dollar, the company has discarded with resources — specifically a biotechnology manufacturing facility site in Washington state. The question I asked my colleague who is also attending the summit was — “what if a team acquired the Washington site for the passionate manufacture of pharmaceuticals specifically for compassionate use — using some of those same experts that were let go last month?”.

The pieces are there — facility, people, knowledge. Add the faith, passion and leadership towards a mission Bono discussed in the interview and safe, efficacious drug product would be able to be provided for those without. I realize I may just be planting a seed, but right now I am a sower and tossing out the seeds. I am hoping that by posting this and discussing this with folks I know that a seed might be planted and germinate into an idea worth pursuing for a greater good. And it would be privately or self funded, not reliant on some government handout.

It sure also would infuse passion and mission back into people who have become jaded to the pharmaceutical borg mother ship.

You gotta love it when you get ammo for your birthday!

And even better, when it comes from your wife!

The quote below came to me this afternoon during my Christian Leadership Summit:

“Our sphere of empathy should be round enough to encapsulate the globe.”

This morning when I woke up, this was awaiting me at the breakfast table. A homemade card. How cool is that? 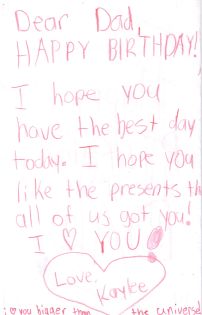 The events of yesterday’s Christian Leadership Summit are still swimming around in my head like unfinished ingredients of a delicious cake not yet done baking. I continue to be humbled, inspired, refilled, and refueled. I have recently been saying that God is stirring up something within me. Well, yesterday he hit the “puree” button.

Below are some highlights that I will try to use as future post fodder.

And folks, that was just scratching the surface of my multiple pages of notes. And I still have another full day today!
(That is my birthday present to myself.)

Today was a beautiful day and K had a great idea for us to have family star night. The sky was clear and the evening was shaping up perfectly. As the sun receded, we grabbed quilts from our custom assorted collection and threw them down on the freshly mown lawn.

The stars slowly came out and we also took to counting airplanes, watching the bat fly above us, and looking for satellites. As normal, I pointed out the big dipper and a few other celestial objects. Although the stars were not brilliant because the sun handed off the radiance to the full moon which popped over the treeline. We marveled at our moonshadows and the night slowly evaporated as we came in and went to bed.

I am excited because today I am attending the first day of a two day Christian leadership conference. They have an interesting agenda and the timing is very interesting with some recent stirrings going on in my life right now. That partially accounts for some of the lack of blog posts and quiet time here at A Slower Pace. When I get to a point where those new directions can be publicly revealed I will post about them.

In the meantime, I am looking forward to today and tomorrow where I believe God will use me and many others. I pray we will be inspired, lead, spoken to, given guidance, encouraged and directed to further His kingdom.

Last Friday I posted about a July temperature record Kentucky broke. Well, today Louisville broke another weather related record — except this one wasn’t much fun in breaking.

Louisville set the single day and single hour records of rainfall today. A nasty morning storm followed by an afternoon storm torrented the area with Noah-like proportions. Much of downtown and surrounding areas were under feet of water. Some areas received 6 inches of rain in 75 minutes. A record was set with 5 inches of rain falling in one hour. At the airport, a previous record of 3.76″ (set back in 1879 mind you) was easily bested to 4.50″.

I’m going out to start work on my ark.