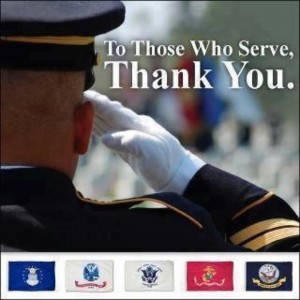 I am forever grateful for those who sacrificed their lives for this great country! Past, present and future.

At church we are going through a series on families. Two weeks ago for Mother’s Day we heard about encouraging moms. Last week was on disciplining parents. This week it was on raising respectful kids.

As always, the sermons were very scriptural and spot on. (I encourage you to go check any of them out online — they can be streamed or podcasted at http://www.southeastchristian.org/?page=3477). Today’s sermon had a few quotes that resonated with me and I am sharing the gist of them here. Unfortunately, I did not write them down so I am going off my memory.

“If you have a daughter, you had better show her Christ’s pure love and appropriate touch, for if she doesn’t get it from you, she will begin to seek it elsewhere.” — James Dobson

“If you don’t want your family to turn out like every other family, then you will need to raise your children differently than everyone else.” — Craig Goeschel

Post NOTE: I went back and listened to the online sermon and corrected the quotes above so they are accurate and attributable to who spoke them. What you are seeing is the corrected edits.

14 years ago I was blessed even more than I was at the time with a small bundle of joy that completely changed my life. My little punkin — thanks for being you: a talented, beautiful, godly young lady. I am proud to be your Dad.

And to celebrate, we made the pilgrimage to the only Jamba Juice in Kentucky…..in Lexington. There we had a liquid lunch and walked a bit through the UK campus. On the way home we spiced it up a bit and made a spontaneous stop at the wiener dog races. The official name was the “Dachshund Derby” but wiener dog races is funnier. Plus, how often do you get to see wiener dogs race? The whole thing cracked me up and we laughed as the little hot dog-like canines with Vienna sausage legs flailing about ran around in not-so-straight lines.

The remainder of the evening was spent with good food, good conversation, great family friends, and fireflies.

Happy birthday, punkin!!!!! Thanks for being one of the best things that has ever happened to me. I love you!

While I am staunchly proud of my American citizenship, birth and home and take every opportunity to soak up all the liberties and privileges of living in this wonderful country, both sets of grandparents emigrated from Norway which gives me a unique 100% Norwegian heritage. I enjoy this lineage and family history and have been to my ancestors’ homeland a couple of times. At one point I was on a path of emigrating and moving there but that is another story for another time. 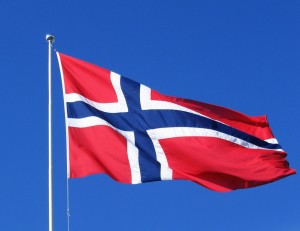 Today is a holiday in Norway — it is Norwegian Constitution Day or, as I like to say, Norway’s 4th of July. I was there during one Syttende Mai celebration many years ago and it was a wonderful event with children’s parades, lots of Norwegian flags flying, traditional outfits and costumes, and merry celebration. I wish my distant family members (some of whom I still connect with via Facebook) a very happy Syttende Mai. My heart celebrates with you.

And for those of you who are not full Norwegian, or even part Norwegian, feel free to join in anyway. It is an inclusive holiday and welcoming to others of different cultures.

My day started off beautifully with the painted morning sky outside my breakfast window. It is going to be a great day and I hope all goes well for a neighbor friend who is seeing her cancer surgeon today. She and her family have been in my prayers and she can definitely use yours today as she finds out how she can continue to battle this. 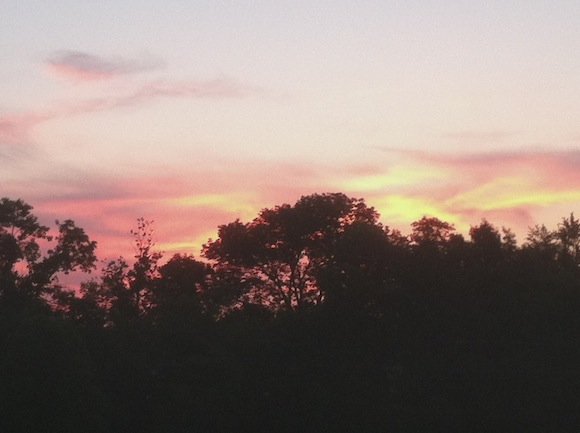 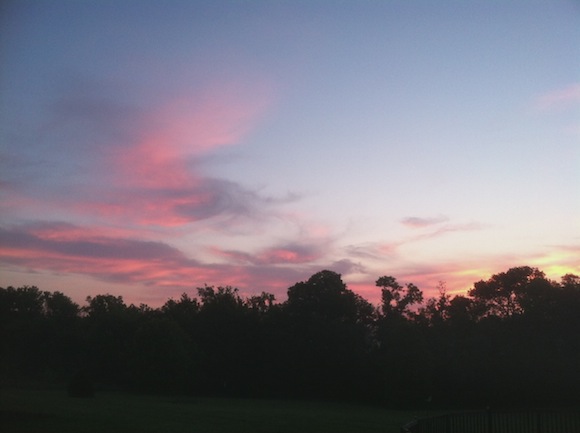 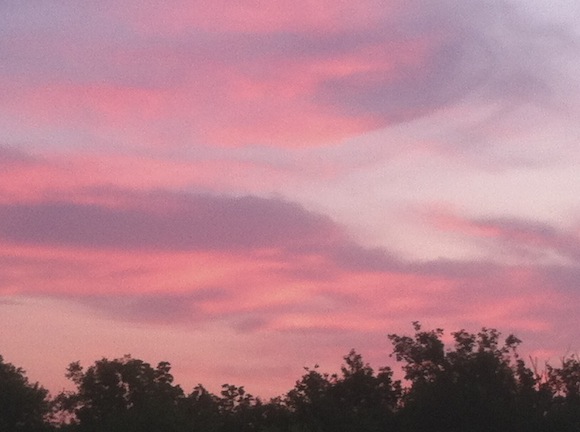 This morning my devotions took me to Psalm 145 where David extols the glory and magnificence of God. I took in the scripture and pondered God’s marvelous blessings in my life and the awe of my Creator. I thanked Him for all my normal blessings — family, faith, shelter, food, work, relationships, service — but then my focus was switched to life and the actual breaths I was taking. I then specifically paused and completely took in my next full breath focusing on the breath and all that was going on around me — the blessings in my life.

The misty fog hung low against the glistening, dew-laden meadow out my sunroom as the sun rose behind the trees silhouetting them against a soft peach morning sky. The quiet home with my family still safe in bed slumbering away. The warm oatmeal in my mouth satisfied my hunger with sustenance and nutrition coupled with cinnamon and brown sugar. The perfect room temperature air entered my lungs filling them and giving the life that God allowed me to have in that exact moment knowing that He is responsible for that very breath in me….. and all the subsequent ones that followed. At that moment I was alive, in no pain, with hunger and thirst satisfied, and no other concerns other than the focus on that one breath and the scripture in front of me.

Thank you, Lord for that breath and allowing me to experience the full satisfaction of all the blessings that made that breath possible. Forgive me for being distracted during so many other breaths where I do not take in your glory and the satisfaction you bring.

While the world tells us to love money and use people,
wouldn’t it be great if, instead, we followed Jesus’ command and
loved people and used money?

Go have a blessed day!

The list of scriptural blessings below was summarized in a sermon I heard quite a while ago. I had taken notes and recently shared them with an anchor point friend of mine. They are good enough to post here for others to enjoy.

That’s it for my notes. However, I can think of a few more. For example, generational blessings (Ex 20:5-6).

I think I might need to do a scriptural word study of blessings — it would be a good enlightening exercise.

Late last week there were many people on the radio, weathermen on TV and Facebook folks who were anticipating Saturday’s “supermoon” — a time where the moon was expected to be 60% bigger in the evening sky due to it being at its closest point to our planet.

So Saturday evening I stepped outside with the kids. And while the moon was full and looked pretty, it really didn’t have anything “super” about it. In fact, there have been times when it was “normal” but lower in the eastern sky as it rose where its orange reflected light really took my breath away. However, Saturday evening was not up to what was being hyped.

Maybe it wasn’t the moon’s fault, but more all of those folks who thought the extra few thousand miles closer (in a 250,000 mile distance) would make that big a difference.

My sister did post a really nice shot that was taken in Friday Harbor. I added my artistic flair to it so as to avoid any copyright concerns. Note that the shot was taken by someone else, but the perspective is artistically mine.

This last weekend while most here in Kentucky were thinking about horses and racing with the 138th running of the race for the roses in the Kentucky Derby, I was working out in the yard. There are several projects that either needed a final push towards completion or that needed to be started and completed. When I started out Saturday morning, I had four staring me in the face. Thankfully, after hard work and family involvement, we were able to completely knock out three of them and make headway on the fourth. Below are some pictures as proof. 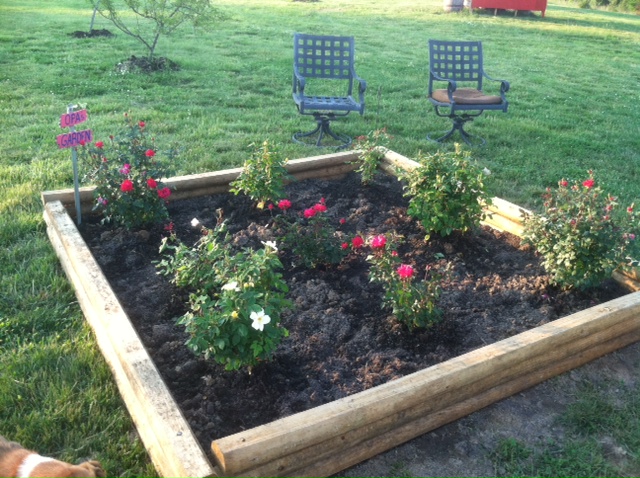 The first was “Opa’s Rose Garden”. Many years ago, when we moved into our first home in California, my father-in-law helped me plant a rose garden in the front yard. Those roses flourished in the direct sun and we enjoyed many beautiful blooms from them until the day we left. We moved and unfortunately, my wonderful father-in-law also succumbed to Alzheimer’s. He is no longer the man we all once knew and loved. This rose garden that we worked so hard on this last weekend is our tribute to him and who he was. He loved roses and gardening and we named it in his honor — Opa’s Garden. We added a few chairs and it has become a favorite place to spend the early evening watching the sun go down behind the treeline after a long day. Opa — we love and miss you! 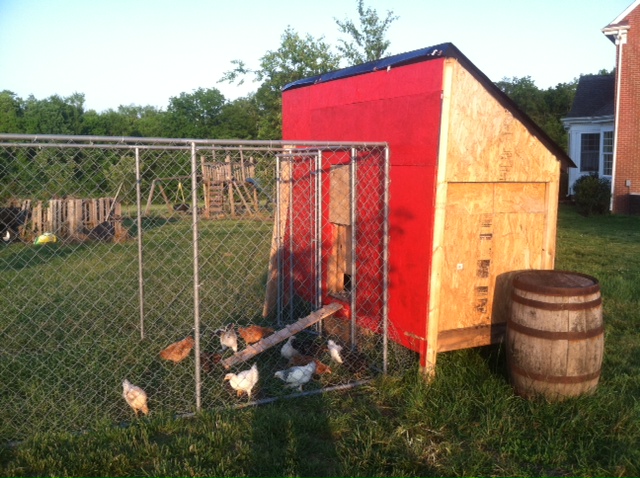 The second project that was completed was more out of necessity than want. You see, about 5 weeks ago we brought home 13 baby chicks from our local favorite country store — Metzger’s Country Store. Those chicks quickly outgrew the Rubbermaid container I had them in and I had to relocate them to a bigger container in the garage. Soon enough, that was also outgrown as well as odorous, not to mention the fact it booted my car outside for the month of April. So putting the finishing touches on the chicken coop was a definite necessity. I am very proud of it because, aside from the $30 roll of chicken wire I bought, I spend $0.00 on the structure. I was lucky enough that a friend of mine informed me of a house build in his neighborhood which allowed my son and I to dumpster dive. We recovered, repurposed, recycled and reused plywood, sheeting, 2 by 4s, 2 by 6s, roof paper and shingles. The whole thing nicely came together with a few modifications to the design in my head. The finishing touches on it will be solar panels for light/heat (notice the perfect south facing sloped roof) and water reclamation off the roof into the whiskey barrel which will provide water for my egg laying hens. The whole project has been very rewarding and self-sustaining and I am looking forward to mid-summer farm egg production for our family. 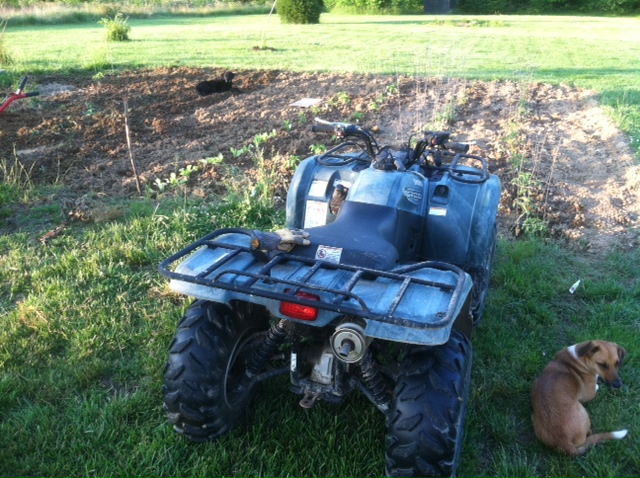 The final project was getting our garden planted. We put in multiple types of tomatoes, red, green, yellow peppers, banana peppers, romaine lettuce, cucumbers, watermelon, cantaloupe and zucchini — all stuff that my family eats. Along with the eggs, corn planted on the back property, hunted deer in the freezer, and the occasional cow provided by our farmer friend, we have a great bounty of food that we know where it came from. And that is pretty cool!