I have posted earlier about our family’s implementation of Dave Ramsey’s Financial Peace Jr. I purchased two kits for K and D when my wife and I started Financial Peace University and the 7 Baby Steps. However, the kits sat around for a few months until I was motivated enough to action (see Goal #10 on this post). At the beginning of the year, I sat down with K and D and we had a homeschool lesson on finances. We reviewed the material in the kits. We learned about paying God first (GIVING), paying yourself second (SAVING) and paying all others after (SPENDING). We then set up our weekly whiteboard chore charts and laid out the kids’ weekly tasks and commission (payment) schedule.

It has been a great improvement process and the kids have responded wonderfully. If I had know it would go this well I would have done it years ago. I came home from work on the first day after our lesson and it was like I lived in a museum. The kitchen was spotless, animals were cared for, and the family and living rooms were swept, vacuumed and all stuff put away. The kids had marked off all of their chores for the day and were excited to point out their accomplishments. Additionally, I had contributed to past failures by not being consistent in checking that chores were done and paying on time in full. With the kids on top of things, that also required that I step up my game. So I have been dutifully checking their progress daily, marking their charts, and hoarding singles like I was a bachelor at a strip club, not for that, but to be able to pay the kids in amounts that can then be split on the spot into their GIVE, SAVE, and SPEND envelopes.

NOTE: the Dave Ramsey Financial Peace systems provide envelopes for you to implement a cash based system of tracking and spending. However, I did not utilize these because I didn’t want to get hooked and have to pay for refills. So instead, I found a PDF online that prints out envelopes that you can then cut out and fold. This is what we and the kids have been using.

Download and print your own FREE printable cash envelopes here. 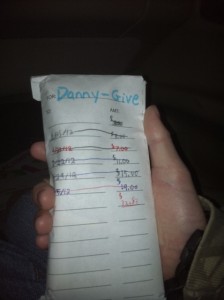 For the kids’ giving, they have been dropping money into our church’s offering. Additionally, they have identified causes and charities that are close to their hearts. As a father, it is so good to see the kids gladly give away some of what they have earned through their hard work. That act loosens the grip money has on us — because after all, it is not ours; we are merely stewards of it.

So when my son said he wanted to give a donation to Wayside Christian Mission (where he frequently joins me for Friday breakfast serving) I was thrilled. He forgot his envelope last week, but this week remembered to bring it with him. He brought it in and gave it to our dear friend who leads up the kitchen and dining room. He, in turn, took D to his boss so he could present it to her. She was very receptive and thankful. And while it was only thirty something dollars, it came from a child who was giving not only his money, but also his time. A homeless guy who was standing next to her even made a comment — “You don’t see that every day from an adult, much less a kid”.

It sure was a good way to start off our Friday.

Comment0 | Share | Tweet | print | email
Categories: Family, Financial / Dave Ramsey, Heroes, Inspirational
Disclosure of Material Connection: Some of the links in the post above are “affiliate links.” This means if you click on the link and purchase the item, I will receive an affiliate commission. Regardless, I only recommend products or services I use personally and believe will add value to my readers. I am disclosing this in accordance with the Federal Trade Commission’s 16 CFR, Part 255: “Guides Concerning the Use of Endorsements and Testimonials in Advertising.”