Today was quite the packed day. I started off with my normal Saturday routine at church with the Men’s Breakfast and Bible Study. From there I was going to pick up R who slept there overnight with the youth group who played broom ball last night, but it seems they stayed up ultra late and she wasn’t even up at 9am when the Bible study was over. So I went and had coffee with a friend and washed all the salt and grime from my car and returned to church around 10:30am. She was barely ready but we plopped all her stuff in the car and she chauffeured me home so I could read.

Upon returning home, D and I put the finishing touches on his Pinewood Derby car in preparation for tonight’s Cub Scout Pinewood Derby. It was a pretty cool looking car and he had an overwhelming hand in the shape, color, detailing and construction. Unfortunately, we didn’t get any test runs in and when he raced it, it was a bit slow. He wants to be a little more competitive and is ready to do the work so the car will run faster. I told him there were no guarantees but that we could work on it. It was a lot different than his attitude during our first Pinewood Derby (posted here).

We had to leave the Pinewood Derby early so we could be back at the house in time to pick up R for her “birthday dinner”. She thought D and I were picking her up to join K and my wife for a nice family b-day dinner. Instead, my wife cooked up a plot to get her to the bowling alley where a surprise party and the church youth group and her friends were waiting. We had a lot of fun and she was a little surprised. She said she had a hunch but all in all it turned out well.

While there, a buddy and I decided to do a little twist on how bowling is scored. Rather than see who could knock down the most pins, we decided who could throw the fastest ball. The bowling alley had speedometers on each lane and we turned it into competitive speed bowling. I went first and thought I was pretty cool at 20.52 miles per hour. From there we leap frogged each other until we were in the 22s. We each thought that was the limit until he blasted past 23mph with a 23.65. At that point it was on. I got a 23.87 which he immediately bested at an even 24mph. At this point we were getting to the end of the game. Knowing I only had 1 or 2 more throws — in the game and in my body — left, I wound up and ran up, hurling the ball down the glazed wooden aisle. I consequently got a strike and all the pins exploded! The speed indicator read 24.95mph! He finished his frames without threatening my top end. At this point my arm was sore and my back was giving me some warning signs. But because he started up a new game, I had to ensure my record held.

During the next few throws we realized the speed indicator wasn’t being displayed on the main page where it normally was. We thought we broke it. A bowling official then ended up speaking with my buddy’s wife letting her know that after a certain speed, the speed indicators are disabled to prevent people from throwing the ball as hard as they can down the lane. Well, too late and we finished up trying to see what that limit was. The theory is that we hit 25mph but it was not reflected in the speed. I’ve maxed out those police radar displays on the side of the road as a young punk, but never at the bowling alley. 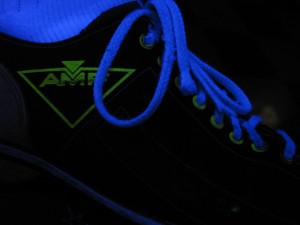 Comment0 | Share | Tweet | print | email
Category: Uncategorized
Disclosure of Material Connection: Some of the links in the post above are “affiliate links.” This means if you click on the link and purchase the item, I will receive an affiliate commission. Regardless, I only recommend products or services I use personally and believe will add value to my readers. I am disclosing this in accordance with the Federal Trade Commission’s 16 CFR, Part 255: “Guides Concerning the Use of Endorsements and Testimonials in Advertising.”